How to make a career as a croupier

Croupier is a relatively young profession in the gambling industry. Croupiers may work in different gambling establishments: casinos, gambling houses. Croupiers have irregular working hours. There are several specializations in the profession of croupier: casino dealer – leads the game, inspector – monitors compliance with all rules of the game, chipper-croupier – assists dealer in collecting and sorting chips.

Croupier’s job description and responsibilities\ are as follows

Croupiers are responsible for explaining the rules of the game and overseeing the strict observance of all rules during the game. Often, croupiers have to deal with various conflict situations. The duties of croupiers depend on the specifics of the game. In roulette, the dealer counts bets, starts the ball (spins) and makes payouts. In poker, croupiers shuffle, deal cards and make payouts (the distribution of chips). 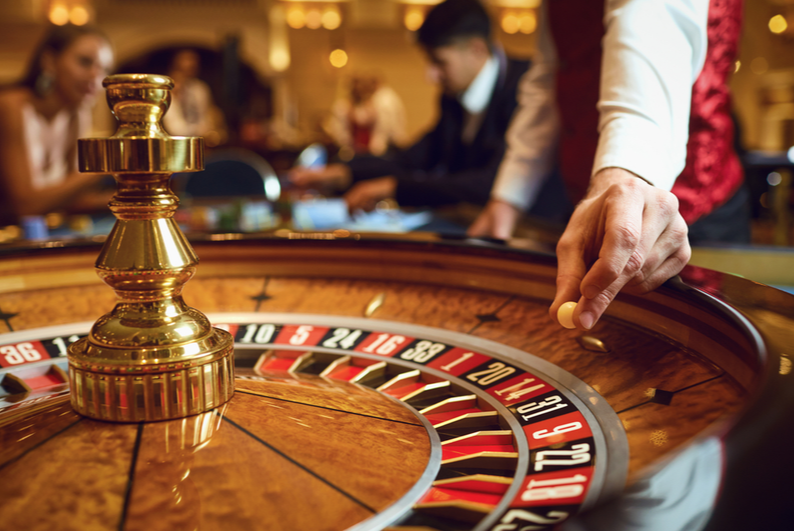 The word “croupier” (from Fr. croupier, banker) commonly refers to all gambling staff, but there is a division of functions performed by an employee: dealer, inspector, cheeper-croupier. The person who directly runs the game at the card table or roulette is the dealer.

There is always an inspector who controls the situation during the game, makes sure that the dealer and the players do not violate the rules. He also has to solve disputable situations if they arise. If the inspector fails to notice the dealer’s mistake, he is punished even more than the one who made it. To help the dealer working at the roulette wheel, there is a chipper dealer, whose duties include assisting in the collection and sorting of chips.

Dealer works by the schedule, in the day, evening or night shifts. Work schedule in casinos is quite flexible: you can work for 8-12 hours per shift, two days in two or four in three, etc. – Each casino has its own rules. Every hour a croupier has a 20-minute break, after which he goes back to the gaming table. Newcomers are usually put on the day shift, while more experienced workers go out at night (the work is harder, but the rates are higher – and therefore more profitable).

They have to work standing up, in a windowless room, in poorly lit and, more often, smoky conditions. In addition, croupiers have to deal with all sorts of people, including drunk and angry customers who might be pushy if they lose, etc. Jobs are available in a variety of casinos and entertainment venues.

There are various courses available to learn the profession and larger casinos have their own free croupier schools. However, it’s not easy to get in, as you have to go through a multistage selection process to get into a school. There are a lot of requirements for applicants. A future croupier should be good-looking and have a pleasant appearance. Obese, too short or tall people are not usually accepted, as they would be uncomfortable working at a standard gaming table.

Important and appearance of the “working tool” – the hands, a man with tattoos or scars on his hands are definitely rejected. It is desirable that the fingers were also long. If a person suits his appearance, he is invited to an interview to find out if he is communicative, literate and polite. Most importantly, they find out how well he can count in his head. Next, the candidate is tested, where he has to cope with mathematical tests, tasks on logic, attention, memory.

If the applicant does not know the multiplication table well, cannot react fast enough, he will fail the competition. For those who pass the test, there is a training period of 2-4 months. The programme is very intensive, with lessons every day from morning to night. The daily class lasts 8-10 hours, and students have to stand for long periods. Many cannot stand it and leave. As a result, very few learn the trade.

To work in a casino a croupier must know the rules and features of various games (roulette, poker, Black Jack and many less known games) and special terms used in them. He should be able to shuffle (professionals call it “shuffle”) and deal cards, launch the roulette ball (“spin”), arrange and divide counters (“slice”), collect them from the roulette table (“clear the field”), and move them across the playing field.

The croupier must have a mathematical ability and be able to count quickly and accurately in his or her mind using a special technique. It is desirable to have a higher education. A well-developed manual dexterity is also indispensable. It is also useful for a croupier to have some psychological knowledge. A customer may become enraged over a loss and take it out on the most obvious “culprit” of his misfortunes – the dealer. Croupiers should feel the nuances of customers’ behaviour, show coolness and composure, not reply to the offender in the same tone, and be polite.

This kind of work requires a strong psyche and stress tolerance, as the profession is a risk group. Regular regime changes, constant tension, stress and contact with nervous customers can lead to depression. Medical contraindications to the profession include skin diseases in the hands, hearing disorders, neuro-psychiatric disorders, and visible physical defects.

For example, croupiers are not allowed to have pockets on their clothes or they must be sewn up, as they cannot hide chips from the table. For the same purpose – to show their honesty – croupiers make a special motion with their hands every time they leave the table, as well as staff of gambling establishments are not allowed to wear jewellery and expensive watches. In some places, even belts on trousers are banned. Croupiers will be fined if they don’t follow the rules, behave inappropriately, or make counting errors.

There is a high demand for these professionals (although there have been recent attempts to legislate to limit the prevalence of gambling establishments, so changes are possible). After graduating from casino school, the best students stay in the same place where they studied, and those who have experience (at least a year) find it easier to get a job in a casino. The salary is made up of a salary plus tips and bonuses. Initially, it may be slightly lower than industry wages, as the newcomer initially goes out on light day shifts. Of course, a person is capable of staying on as a croupier at a not very high salary for a long time, but if he has the ability and is noticed by management, the newcomer is entitled to expect a career move up the ladder. After a while, he becomes an experienced dealer capable of working the busier and higher-paying night shifts, handling complex situations on his own, and playing with multiple casino customers at the same time.

His salary can be 2-3 times that of an industry specialist (depending on the level of the gambling establishment). A nice addition to the salary are the tips left by the customers. But the croupier does not have the right to take away all the tips a player gives him personally – the bonuses received by dealers are summed up and then divided between the staff taking into account an individual coefficient which depends on the level of professionalism of the employee.

As a career advancement, there is the prospect of taking up the position of inspector with a higher salary. A first-class croupier can rise to the position of pit boss – the manager of the gaming hall – in a couple or three years. He is a significant figure in the casino and controls several tables. The pit boss opens and closes the gaming tables, coordinates and evaluates the staff, calculates the croupiers’ salaries and solves various issues and problems. Further up the career ladder is the casino manager, who keeps order, rotates croupiers, and quells conflicts. Above the manager is the manager. And, of course, croupiers have a theoretical chance of one day owning their own casino.

Online croupier: features of the profession

By carving out a niche for themselves in virtual space, online casinos have gradually spurred the emergence of a new business activity. Now, visitors to virtual portals are greeted and served by online croupiers. Despite the fact that, in general, this profession involves the same things as when working at land-based establishments, there are certain differences between them. 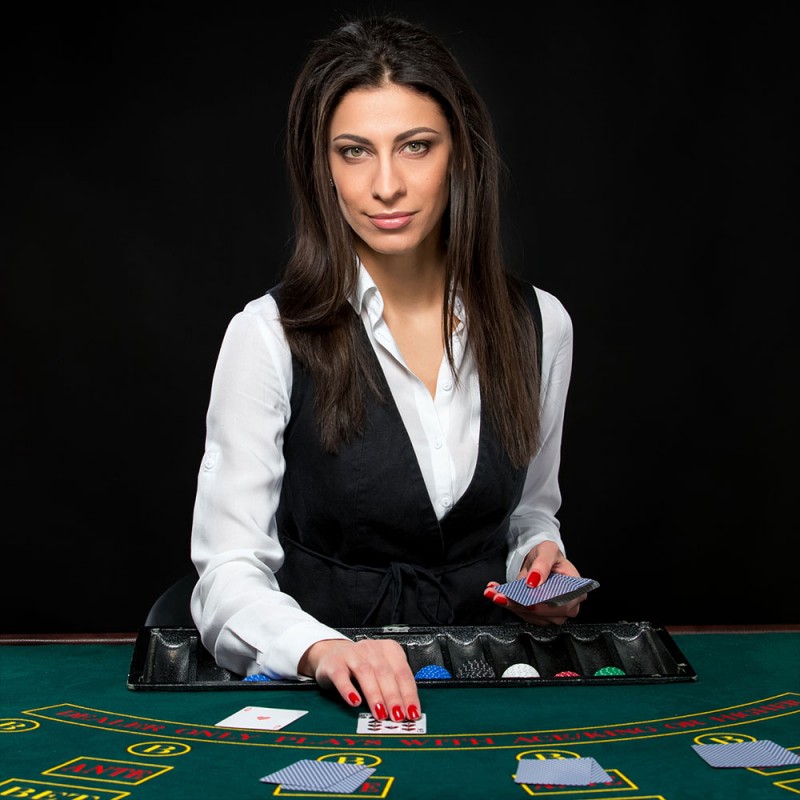 Each working day of a live casino employee at the sites starts according to the same algorithm – the employee has to thoroughly prepare for the game table after coming to work. It is required to put on a uniform, apply makeup and do their hair. The clothes must be perfectly clean, ironed and look harmonious on the dealer. A quarter-hour briefing is held with all croupiers who are due to leave for their shift. The staff is given information such as: innovations; changes in the rules of the game; changes in the dealer’s schedule or rules. Once the debriefing has been completed, the staff members will then take up their duties. They play all games live, strictly adhering to their work schedule and dress code.

Duties and wages of a virtual casino dealer

As in other professions, a croupier needs to be punctual, friendly, sociable and carry out his or her duties accurately. A good online casino employee is always responsible, regardless of their mood or life circumstances. He is expected to provide competent advice, cheerfulness, professionalism, and help players if the situation demands it. Croupiers are paid fairly high salaries, both in land-based and virtual casinos.

The amount of money you receive depends directly on the professionalism of the employee at the online establishment. If he proves himself to be a responsible employee and does not make mistakes during the month, he will receive extra bonuses for every hour he works. It is logical that in such a case, not only the salary is increased, but also the status of the croupier. There is a certain gradation, which implies the following levels: Silver, Gold, Diamond and Prestige. When a croupier advances to a new level, he or she gets an additional raise to his or her rate of pay. The highest paid croupier in an online casino is currently known to earn around €1,500 per month.